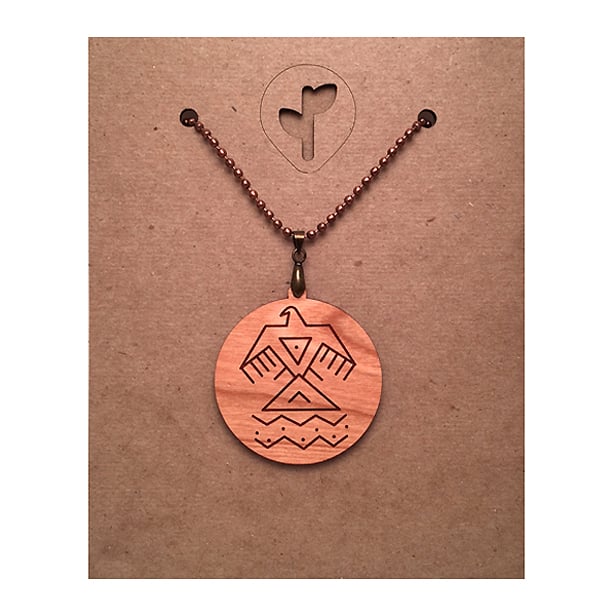 we are proud to announce the release of our standing rock “water protectors” wood pendant. 100% of the profits will go directly to help the camps established at standing rock.

stephanie big eagle, a descendant of the oceti sakowin (great sioux nation) who designed this graphic has given us her blessing to recreate it as a laser etched wooden pendant to help support the water protectors at standing rock

"thunderbird represents great spirit, who watches over and guides all of the protectors at standing rock. the thunderbird, or wankiyan, is very sacred to our people because its arrival in spring brings with it the gift of life: mni wiconi, or the life-giving waters which rain down from the sky. thunderbird is highly respected not only for its life-giving powers, but also because it is known to attack the impure of heart with bolts of lightning from its eyes. In the heart of the thunderbird is a circle which represents all the nations who have come together as one to stand with standing rock. the tail of the thunderbird is a tipi, which represents the woman (life-giver), the gathering place of tribal leaders, and the birthing place of future generations. beneath the tail flows the river of life, carrying within it the seven bands of the oceti sakowin (great sioux nation), whose ancestors foretold of a time when all nations would heal and unite as one after many generations of suffering. together, the thunderbird, the tipi, and the river of life embody the new path of the no DAPL movement: one of unity, peace, transformation, and especially the power of the spiritual path over one of greed, abuse, and brutality." ...stephanie big eagle